We spoke about the benefits of Trex®  fence posts in a previous entry. This time, we’re talking about using Trex posts creatively with other materials besides the Seclusions rails and pickets. Since Trex posts don’t need to be used explicitly with the rest of Trex fencing, there are several different ways they can be applied … alternatives to wood posts in combination with wood pickets and rails, colonnade beams, landscaping timbers, railing posts for decks and patios, etc. Our blog post today describes one of the most popular ideas.

Get creative with ornamental fencing!

Of course, the Trex post is the standard support for the Seclusions fence. However, because it isn’t routed or grooved it has become popular to use it in conjunction with other materials. The most common configuration is to use the Trex post for ornamental fences. It gives an ornamental design the striking appearance of a more stately fence. It is also particularly attractive when a portion of a fence line is created with a full Trex Seclusions fence and with the remainder in ornamental such as iron or aluminum, creating the statement that these two fences compliment each other. Attaching the metal panels is often as easy as placing flat-mount brackets against the face of the Trex post.

It isn’t just looks that makes a Trex post an excellent alternative. The beefy 5″ x 5″ composite post is stronger and longer-lasting than 2″ x 2″ or 2.5″ x 2.5″ metal posts used with ornamental panels. Trex won’t rot or rust, and does not need to be painted or stained.

Here is an additional set of pictures that showcase the beautiful look of Trex posts combined with ornamental panels and gates. 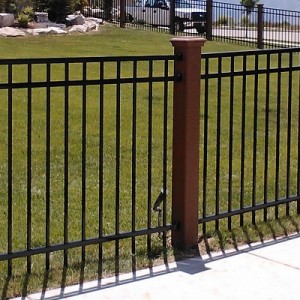